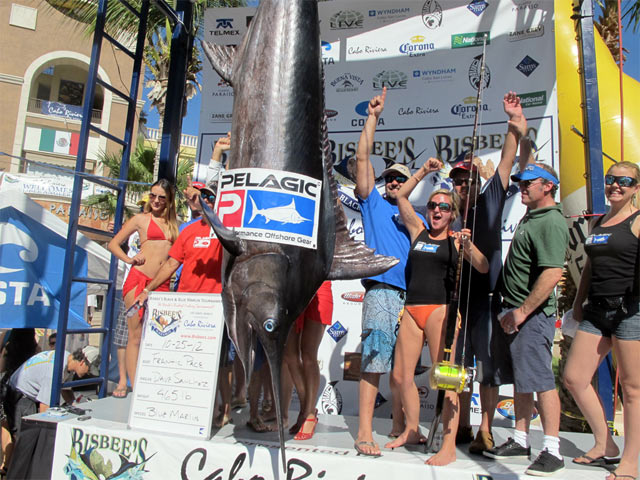 Before this week, the biggest fish Dave Sanchez had ever caught was a largemouth bass near his home in Kansas City, Missouri. His first marlin, a 465-pound blue landed Thursday off Cabo San Lucas, was respectable but not exceptionally large by normal Black & Blue standards. However, It happened to be the only qualifying marlin weighed during the 32nd annual marlin fishing tournament and that is very noteworthy. Since Sanchez and his team aboard Frantic Pace were entered across the board in all cash categories, they are taking home $2.396 million for their fish. That payout is the second largest for a single team in Bisbee’s tournament history. A total of $2.475 million was up for grabs in 2012.

“I’m really starting to like this offshore fishing,” Sanchez said with laugh. “We had a lot of fun, it was a great team effort and I’m just glad we ran across that fish. We found one, caught it, and as luck would have it that was all it took.”

Frantic Pace came within 1/4-inch of losing its record payout. That’s because the snap swivel connecting the reel’s main line to the lure leader opened during the fight. When mate Josh Temple realized the predicament, he gently leadered the fish to the boat before Tony Berkowitz planted the gaff. Once the marlin was aboard the 53 Pacemaker, the crew realized how close they were to disaster. The only thing holding the lure leader was the 1/4-inch bend at the end of the snap. Capt. Hercules “Herk” Marsella of Coral Springs, Florida, was at the helm for the lucrative catch.

Since no other marlin weighing more than the 300-pound minimum were recorded during the three days of fishing, Frantic Pace swept all the major cash awards, including the Top Tournament, Top Jackpot, Top Captain and all Daily Jackpot levels. The total payout was $2,396,800.

More than 740 anglers aboard 106 boats competed in the 2012 event. The stakes are high in the richest sport-fishing tournament in the world. It takes $63,100 to enter in all jackpot levels, including the $10,000 daily, and the potential million-dollar prizes attract top anglers and crews from more than a dozen countries to the tip of the Baja peninsula. The largest Black & Blue payout for a single team was $3.9 million in 2006. Frantic Pace now adds its name to the record book.

The Release Division payout came down to minutes this year, as all the top teams released a single blue marlin. Sea Angel, another new team to the Black & Blue fishing aboard a 63 F&S with Capt. Billy Angel at the wheel, won first place based on time of release. That catch earned a check for $50,830. Sneak Attack, a 65 American Custom Yacht skippered by Capt. Sammy Talbert, came in second to win $17,595 while Hammertime, a 68 Hatteras run by Capt. Jeff Richardson, won $9,775 for third place.

“You know me, I always like to spread the money around,” Tournament Director Wayne Bisbee told the crowd assembled for the lavish awards celebration Saturday night. “But part of the appeal of the Black & Blue is the chance to win a really big check and tonight that honor goes to the Frantic Pace team. Congratulations to them, and muchas gracias for another memorable tournament. It’s been a helluva week.”

About Bisbee’s Black & Blue Tournaments
Bisbee’s has been producing sportfishing tournaments in Los Cabos, Mexico for over 30 years. Known as “the world’s richest tournament” the Black & Blue, which takes place every October, holds the world record for sportfishing cash awards at $4,165,960 set in 2006. More information…

Specializing in Los Cabos for over 30 years, our team loves sharing our expertise, passion and insider tips for this beautiful destination. We focus exclusively in Los Cabos, Mexico travel representing over 100 vacation rentals in Cabo and 50 beachfront resorts. In addition to our outstanding accommodations and villa rentals, we offer an exceptional level of personalized guest service. To start planning your amazing Cabo vacation, contact our team at 1-800-745-2226.
View all posts by CaboVillas.com →
This entry was posted in Uncategorized. Bookmark the permalink.