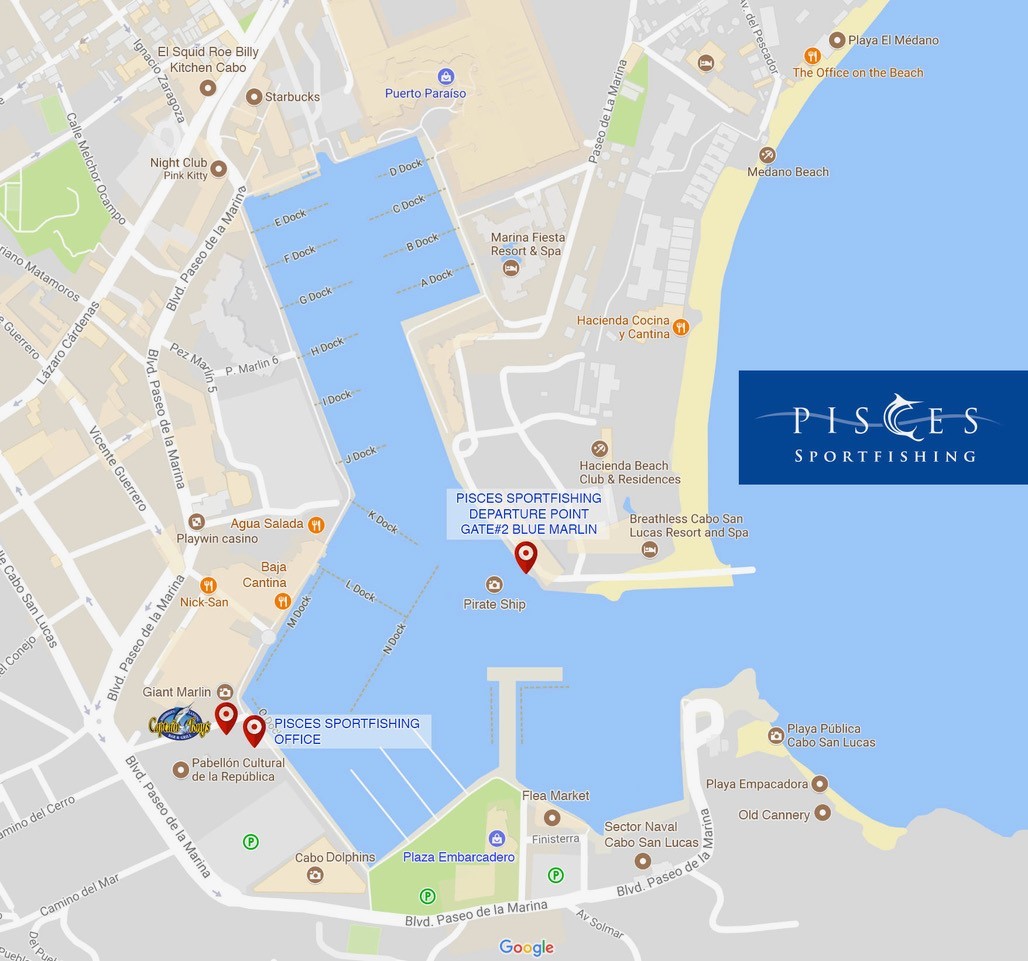 A day at sea fighting a prize fish can be a thrilling highlight of your Los Cabos vacation. For maximum comfort on your journey, we recommend applying sunscreen and taking appropriate precautions if you are prone to seasickness; highly effective pharmaceutical and drug-free treatments are available. As your fishing charter may last up to 8 hours (depending on the charter selected), all-inclusive options including lunch and refreshments are a great deal.

Only one billfish or marlin can be killed and brought aboard the boat. You can then catch and release as many as you want. Some boats allow you to tag your billfish. Cleaning billfish is NOT included in the charter price. This is done at the main sport fishing dock when you return, and is subject to the prevailing rate on the dock.

What Can I Do with My Catch?

We believe in the conservation of billfish, and therefore request that you release the billfish you catch, unless it is your first or you want to eat the meat. 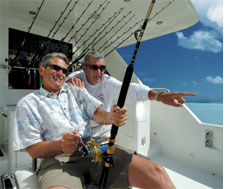 If you want a souvenir of your fish as a wall trophy, it is no longer necessary to kill the fish. New "catch-and-release" reproduction techniques create high-quality replica mounts, taken from molds of the live fish you catch. Skin mounts are still available, but the quality deteriorates after a few years.

Billfish are cleaned at the main dock, subject to rates on the dock (usually $12).

If you want to take your fish home, bring a cooler with you. Local stores normally have a good supply, though they are generally quite expensive. Usually a 42-quart cooler will satisfy the 44-lb restriction on most airlines. If you bring a bigger cooler, you will have to pay the excess baggage charge, usually $1 per lb. Airline rates vary, so check with the air carrier on exact cost. Also note that a cooler is considered one piece of baggage. Most airlines allow you to check in two pieces of baggage and one carry-on. Unless your trip home is extensive, most fish make it back in a perfectly fresh state.

You can also arrange to have your fish cooked at a local restaurant. Your charter crew can recommend the best local options.

It is the responsibility of the customer, not CaboVillas.com or the crew, to ensure that you have collected your personal items when you depart.

Please tip the crew for their hard work at the end of the fishing day. We recommend 10-15% of the charter price. Pay your tips directly to the boat captain, who will distribute shares to the crew.

Black Marlin - (Makaira indica) is the largest member of the marlin family, reaching a maximum weight of 1,000 lbs and lengths up to 15 feet. Trophy catches are generally females as males rarely exceed 300 lbs. The blue marlin is deep blue-black on top and silvery white below, with a spear-shaped upper jaw and prominent dorsal fin. The pectoral fins do not fold flat against the body, a key identification trait. These monster billfish represent a unique challenge for experienced sport fishermen.

Blue Marlin - (Makaira mazara) is a highly prized game fish with a long, slender spear and is the second largest member of the marlin family. The color is cobalt blue above to silvery white below; this species may have light blue vertical stripes. Blue Marlin can reach over 15 feet in length and weigh over 1,000 lbs, but the average weight is between 125 and 300 lbs. Blue Marlin feed on dorado, mackerel, mullet and small tuna.

Striped Marlin - (Tetrapturus audax) are found in tropical to temperate Indo-Pacific seas, not far from the surface. This large game fish features an elongate, compressed body, light blue vertical stripes, long pectoral fins and a rounded spear. The Striped Marlin feeds on anchovies, mackerel, squid and crabs. This fish can reach over 13 feet in length and weigh more than 450 lbs. Los Cabos is known as the Striped Marlin Capital of the World, where this species can be found throughout the year in varying densities.

Sailfish - (Istiophorus platypterus) are dark blue on top, blue-brown laterally and silvery white below. This large billfish is related to the marlin but is distinguished by the enormous sail-like dorsal fin running the length of its body. It can reach a length of 11 feet and weigh up to 200 lbs. This highly prized game fish is known for its incredible jumps when hooked. Extremely fast, individuals have been clocked at speeds up to 68 mph, the fastest reliably reported speed for a fish.

Swordfish - (Xiphias gladius) is a large pelagic member of the billfish family and is exceedingly difficult to catch by anglers. With a broader tolerance for temperature variations than other billfish, the swordfish spends evenings near the surface but dives to depths between 1,000 and 2,000 feet during the day. It feeds on mullet, squid, mackerel and small tuna. The long, flat sword, dark coloring and short dorsal fin distinguish this species. Swordfish may reach up to 15 feet in length and weigh up to 1,300 lbs.

Dorado - (Coryphaena hippurus) also known as mahi-mahi and dolphin-fish, is prized as a delicious game fish. Found in off-shore temperate, tropical and subtropical waters, dorado are distinguished by their brilliant colors ranging from bright blue-green on the sides and back, to dazzling golden hues on their sides. Once removed from the water, the fish gradually fades to yellow-gray. Males feature a prominent, square forehead while females have a more rounded head and are generally smaller. Dorado can reach a maximum length of 6 feet and weigh more than 65 lbs., although most catches are less than 30 lbs.

Tuna - A number of tuna species are found in the waters surrounding Los Cabos, including Albacore, Bigeye, Bluefin, and Yellowfin. Smaller members of the Scombridae family found locally include skipjack and other mackerel. Tuna are powerful swimmers and are highly prized as game fish. One of the most sought-after catches, Yellowfin Tuna (hunnus albacares, also known as ahi tuna) can reach over 7 feet in length and weigh up to 400 lbs. Smaller yellowfin weighing up to 5 lbs. are known locally in Los Cabos as "footballs."

Wahoo - (Acanthocybium solandri), also known in Hawaii as ono, is a dark-blue, elongated fish with an iridescent green-blue back and a pattern of blue vertical bars. A member of the Scombridae (tuna, mackerel and bonito) family, this pelagic species is found from the Pacific side of the Baja peninsula to the east side of Baja. A fierce fighter, this species is extremely difficult to catch. Prized for a thrilling fight and good eating.

Yellowtail - (Seriola dorsalis lalandi) are distinguished by a sleek, aerodynamic body, blue upper back, silver-white sides and belly, and yellow fins.  While yellowtail can reportedly reach a length of up to 8 feet and weigh up to 110 lbs., Mexican fish are rarely 50 lbs in weight. Feisty fighter.

Cabrilla - There are a number of different varieties of cabrilla (also know as sea bass or grouper) found in the waters of Los Cabos. These include the Barred Sand Bass, Kelp Bass, Damsel Bass, Starry Grouper, Golden Grouper and other species. These fish are generally found in areas with rocky bottoms or reef structures. The larger varieties are considered excellent for eating.

Pargo - Several varieties of Pargo (also known as snapper) are found around Los Cabos. Varieties include the Mexican Barred Snapper, Blue-Gold Snapper, Colorado Snapper, Dog Snapper, Golden Snapper and Yellow Snapper. Most of the snappers reside in the first 200 feet of water, in shallow reef areas. Prized for eating.

Any non-resident alien 16 years or older must possess a valid Mexican Sport Fishing License before fishing in Mexican waters. This license covers all types of fishing and is valid anywhere in Mexico. Everyone aboard private boats in Mexican waters must have a fishing license if there is fishing gear of any kind or fish (or fish parts) on board. A fishing license is also required for underwater fishing.

Except when skin or scuba diving, fish must be taken by angling with a handheld line, or a line attached to a rod. The use of nets (except handling nets), traps, poisons or explosives is strictly prohibited. Skin and scuba divers may only fish with handheld spears or band-powered spear guns. It is illegal to sell, trade or exchange the fish caught. Fish can be eviscerated and filleted, but a patch of skin must be left to permit identification. 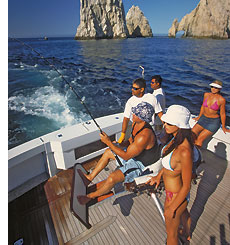 If you're bringing your own fishing gear, here are some basic rules: make sure your rods and reels are in the best working order. The hard-running fish in Baja will push the limits of your tackle. Make sure you have fresh main line on your reels, and fresh leader line on your lures.

Take care not to confuse 100# mono leader with 100# mono line. Many manufacturers use a harder, more abrasion-resistant mono for their leader material. Most manufacturers also tend to under-rate their mono leader by 25% or more (300# actually breaks at 400#). Hard, under-rated 100# leader like Momoi is fine for striped marlin, but a piece of a nice, soft 100# line like Berkeley Big Game may get sawed off fairly quickly.

In general, 500 yards of 80# line with drag set properly will slow down and catch a marlin. Or you can have a 700-yard reel with 50# line. Most blue marlin caught in the Cabo region are males in the 250-350 lb class. Those above that weight are usually female. Rods are five-and-a-half to six feet, usually E-Glass, with a minimum of tip and stripper roller guides. The rod butt must have a trolling gimbal; otherwise, it will not set in the boat trolling slots properly (the reel will turn over).

There are five basic lure colors that the local skippers use: green-black, yellow-orange, blue-pink, purple-black and green-blue. The size is 10 to 12 inch, and the style is plastic or soft (soft lures are gaining popularity). Rigging is 400# 12' clear mono leader with a tandem double hook 12/0 Mustad big game.

There are several different ways to rig large live bait. The Mexican skippers simply attach a 9/0 chrome stainless Mustad hook, with a 250 to 400# 8-12' leader. They then run the hook through the Bonito tuna's nose. Other techniques include wire threading and attaching the live bait hook to the bait's forehead.

Leader length of 3' of 30-40# (green mono may work better than other colors) with a rubber core sinker for Pargo.

Leader length of 3' of 50-80# with a dropper loop, and whatever weight of torpedo sinker (usually 4-16 oz) is necessary to get to the bottom for Amberjack, Cabrilla and other fish living in rock piles. Make the dropper with a spider hitch, with a foot loop and 3' tag, with the hook on the loop and sinker on the tag, and with a half hitch in the tag near the sinker, so it breaks off first when you get hung in the rocks.